The history of St. Philip has been largely shaped by all of the Pastors we have had the good fortune to have assigned to us. Each one of them touched our lives in their own special way. Here is a brief recap of our Pastors and their many contributions to our Parish Community.

In 1884, Father August Van Sever was appointed the first resident Pastor of St. Philomena. A rectory was built soon after his arrival. In 1885, the parochial school was opened with the sisters of Notre Dame of Milwaukee in charge.

Father Philip Wagner arrived in 1917 and shortly after his arrival, property was purchased in the Village of Rudolph where the present parish buildings are located. In 1920 - 1921, a large eight room bulding was erected which was to serve as the church, school, rectory and Sisters convent.

In 1928, the Grotto had its beginning. The erection of the shrine was Father Wagner's way of saying "thank you" for his vocation. Earlier in life, he had visited the Lourdes Shrine in France where he promised to build a shrine to Our Lady if his health would be restored so that he could become a priest.

In 1950 - 1951, due to the large parish enrollment, the old building was no longer adequate. The combination church and rectory was built. The present convent was built in 1960 - 1961.

For forty-two and a half years, Father Wagner remained Pastor until he was called to his reward on All Saints Day, November 1959, and was laid to rest from his many labors in All Souls Cemetery.

Father Garlan Muller was assigned as Pastor on November 24, 1959. In 1961, Saint Philomena's Church was rededicated and given the name of St. Philip the Apostle, and reincorporated under the same title, in honor of Father Philip Wagner.

During the pastorate of Father Muller, with the help of the able artist and custodian, Edmund Rybicki, much remodeling and renovating was done, such as the Sunken Gardens, Our Lady of Fatima Grotto, Shrine of the Annunciation, and the artistic and inspirational Way of the Cross. On October 29, 1969, Father Muller resigned due to failing health.

Our fourth resident Pastor, Father Robert Perkins was assigned in 1969. The Parish church and sanctuary were redecorated, as well as the dining hall and many renovations in the school. Father Perkins had a green thumb and kept the Grotto Gardens a vast, gorgeous, floral wonderland. All Saints Day 1974, the beautiful 1,000 pound bell, which greeted the sisters in 1885, was suspended in a magnificent bell tower which tolls before each Mass and Angelus is heard aging three times a day in Rudolph.

Our fifth resident Pastor, Father Richard Wisnewski, was assigned to us in September, 1983. St. Philip's School saw the first kindergarten class with 15 students in 1985. This was achieved under the direction of Father Wisnewski.

Father Richard Herrmann was assigned to us in August, 1985. During this time, a new roof and furnace were installed in the church as well as renovation of the inside of the church, including our beautiful stained glass windows.

Father John Hogan became our Pastor in July, 1996 with residence at St. Lawrence in Wisconsin Rapids.

In January 2004, we welcomed Father George Nelson Graham from Ghana. In October 2008, he returned to Ghana for a year sabbatical.

In October 2008, Father Tim Welles became our Associate Pastor and, he was subsequently named Pastor in June 2011. We shared Father Tim with St. Lawrence Parish. Father Tim brought vitality and youth to our Parish and inspired us all to become more involved.

In September 2012, Father Rolando Onden became our new pastor. Father Onden is from the Phillippines, and we loved hearing about his life and sharing in his ministry.

The decision to take down the school was made in late 2014 based on finances, condition and lack of use. At that time, the convent was rennovated to serve as the new parish center for CCD classes. Demolition on the inside began in early 2015. The back entrance, approximately 4000 bricks, a blackboard, a railing and some other artifacts were retained to be used in a new garden/gazebo space to be built in 2016. Two separate companies were active in the demolition. Beams, flooring and trim will be repurposed for years to come in new projects throughout the United States!

In 2015, Father David Bruener became our new pastor. During his tenure, the School was replaced with a beautiful new welcome center with a beautifully appointed board room and meeting room.

Father Janusz arrived in Summer 2019 and is our current pastor. 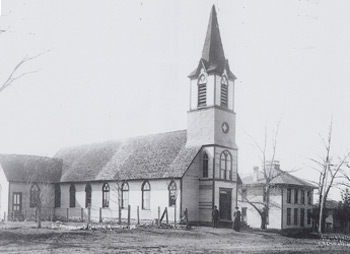 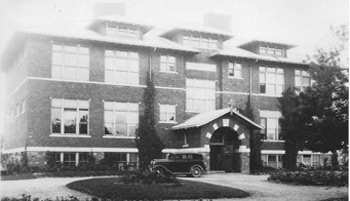 St. Philomena Church, Rectory, School and Convent all under one roof, built in 1921 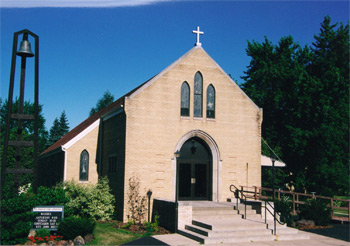